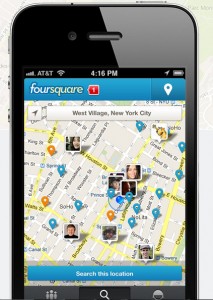 Advertisers are developing a growing appetite for mobile; however, only 1% of advertising dollars are spent on mobile while users spend 20% of their time on mobiles, and it is only increasing.  Mobile applications are now a $110 billion market and growing at 100% per year. Yet traditional advertisers are either not sure how to enter this arena or are not convinced of its reach and possibilities of increasing engagement with their customers.

Companies are leveraging social media, like Facebook and twitter through paid advertising and non-paid (which still costs money because you need an individual or team to maintain your presence).

Location based advertising is getting bigger by the minute. Foursquare, a service that enables users to “check-in” at locations with their mobile has been around for quite a while. Based on proximity to a location a business can provide offers to entice people into nearby stores.  It has recently gone through changes including addition of Explore. With Foursquare Explore you can write reviews of a restaurant and share it with friends. There are many applications that stem from foursquare. For example, GranataPet brand dog food uses interactive Billboards to provide dog food samples when people checked in at their billboards. You walk up to a physical billboard and check-in; once you check-in a sample of dog food is dispensed at the bottom of the billboard into a doggy bowl. It’s unique, catches people’s attention and is relatively inexpensive.

Others are taking on a completely different route, like mining intelligence from social media.  Mobile phones and tablets are being used more and more at home, especially for social media, especially while watching TV.  Bluefin is a Social TV analytics company that tracks what is being tweeted during a show’s airing time slot and then can help companies better focus their advertising to their focus customers.  For example, when Bachelor Pad is on there are a lot of tweet mentions on Margaritas. That information is valuable to companies that sell spirits.

Then there is Shazam with 175 million users, the world’s largest music discovery source.   They are the fourth most downloaded application in iStore; 30% of iPhone users have Shazam on their phones and they are all installed by individual users.   8% of users go on to purchase the tunes so they are the largest affiliate for iTunes. For those unfamiliar with Shazam you use the application to identify songs that are playing by simply touching the screen and the application samples the music playing. Then users can go onto purchase the song on iTunes, if they want. Shazam is now moving into television shows and advertising, turning into a media discovery source where audiences can further engage with a brand. This means that you use the application to capture a portion of the tv advertisement using Shazam and it will take you to a website where you can get more information to the user and get more involved with a brand. They essentially make TV ads pseudo clickable so that television advertising becomes more trackable and audiences can engage more with the brand. Through Shazam, advertisers know who is viewing their ad and who is engaging further with the brand. They are enabling advertisers to take a 30 second TV spot and turn it into a four minute engagement.  Plus when you tag something they know where you are. It is not as obvious to see their penetration in Canada; however, in the states 1/3 of super bowl ads were Shazamable – the biggest night for television advertisers.